Dust to Digits: Writing Our Stories Through Family Photographs

I wrote this post as a guest contribution for Digital Writing Month. I hope it will inspire you to to reach back in time, learn a new story about yourself, write, and share. 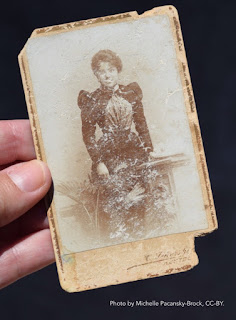 “Each photograph is read as the private appearance of its referent: the age of Photography corresponds rather precisely to the explosion of the private into the public, or rather into the creation of new social value, which is the publicity of the private: the private is consumed as such, publicly.”      – Roland Barthes, Camera Lucida, p. 98


When I was a little girl, my mother often shared her old family photographs with me. The photographs were stored in a tin trunk under my parents’ bed. Kneeling on the floor, pulling out that trunk, cracking it open, and unleashing the musty scent contained inside became our ritual for initiating our travel through time. My mom, a first-generation born American who was born to two German immigrants, would share stories about her family members.

Photographs were especially important to my mom, as she experienced the tragic loss of her sister and only sibling at the age of 39 and the sudden passing of her mother just two years later. Looking at and sharing stories about the images imprinted on the old torn piece of paper was — and still is — her way of visiting her loved ones. There was a palpable connection between my mom and the time and space of the fading figures portrayed in the images, it was as if the photographs had a magical ability to collapse time for her.

We repeated this tradition numerous times throughout my childhood, often with my two sisters. I also ventured into the tin box on my own sometimes, gazing into the fading eyes of relatives who I had never met. Over time, the photographs became familiar to me; yet, there was one that I secretly treasured more than the others. It was a small, sepia-toned image printed on cardstock (known as a carte de visite). It measured about 2” by 3”. The corners were torn and the surface of the image was heavily scratched. On the back, my mother had written the name of my maternal great grandmother in pen, but aside from that there were no identifying marks on the print.

Despite the ambiguity of the photograph’s context, this image resonated with me. “You are my great grandmother,” I used to think to myself, as if she were there in the room with me. My great grandmother lived in Germany until the age of 99 and passed away when I was quite young. I never met her. I would scour the surface of that image with my eyes, in a desperate quest to know her. I wanted so much to find that “something” that would transport me from the floor of my parents’ bedroom to that moment she stood in front of the camera’s lens.

Through this search, I recall admiring her appearance. I wondered if I’d be fortunate enough to grow into the beautiful woman she was. I would gaze at her dress and imagine what the fabric felt like and what color it was. I resented the scratches that removed the details of her face, as I believed that’s where her essence would be revealed to me. Yet, I never found what I searched for in that photograph.

A photograph's punctum is that accident which pricks me (but also bruises me, is poignant to me). -Roland Barthes, Camera Lucida, pp. 26-27 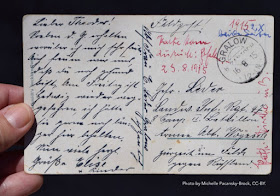 At some point through the years, however, my mother shared more about my great grandmother that transformed how I related to that photograph and, ultimately, how I understood myself. There was an old postcard mixed in with the photos in the trunk that had a message composed in hand-written script on the back, which I could not read — and neither could my mother. She explained that it was a postcard my great grandmother wrote to her husband (my great grandfather) during World War I, sometime after he left for battle. It was postmarked August 16, 1915. My mother also pointed out a phrase, written more rigidly in red ink in the blank space near the postmark stamp. One word was decipherable: “gefallen” with the date August 25, 1915 just below. Gefallen. The German word for “killed in action.”

I imagined my great grandmother writing that postcard by candlelight, after getting her five young daughters settled into bed for the night.  I imagined the care it took to write in such detailed, beautiful German script (known as Sütterlin). I imagined her taking the time to be sure the ink had dried. And I imagined her slipping the postcard into a cloth mailbag, picturing it arriving in her husband’s warm hands.

While I don’t know the details of how the situation actually occurred, I also imagined how she must have felt upon receiving the returned postcard, a love letter transformed into a death notice. I imagine how she went about her life after that moment. How that experience transformed her, made her reach inside and embrace the strength she didn’t know she had. I imagine how that strength was transferred to her five young daughters, now fatherless, in war-torn Germany. “War hero” meant something very different to me from that moment on.

After learning of that story, I never looked at the photograph of my great grandmother the same again. Her body, once a graceful representation of female beauty, conveyed power and pride. The scratches on the surface and the torn corners were less of a nuisance from that point. Instead, I related to them as footprints tracing a long, arduous journey. I wondered where the photograph had been and who had held it. I wondered about photographs that I didn’t have access to and others that were never taken.
But that wasn’t all that changed for me. I also began to relate to myself differently. As I grew up, I felt the strength of my great grandmother inside myself. Knowing her story and imagining what her life experiences were like empowered me to know I too was strong. I wasn’t just a “pretty little girl;” I was her great granddaughter. And my mother was her granddaughter. And my grandmother was one of those little girls tucked in bed as she wrote that postcard. While I have had many empowering experiences in my lifetime, this story opened a new way of understanding where I came from, who I was, and what I could do.

Personal photographs are like treasures. They document our past and connect us with those who lived before us. However, the stories we associate with a photograph construct the way we relate to it and the way we remember and value the subject(s) rendered upon its surface.
In our digital age, any photograph — no matter how old — can become a liquid photograph, enabling us to share stories with the world through blog posts, like this one. This is an ideal strategy for engaging students in the process of writing, because the process of writing fades away and becomes invisible when our efforts are focused on sharing a story. Last year, I sent my online community college students on a “Photo Quest.” One of the topics from which they chose was titled, “Who am I?” This topic’s task was to excavate a story from their past through a conversation with a family member about an old photograph (an alternative topic was provided for students who did not have access to family photographs and/or family members). One of my students shared this story about a photograph of him and his sister, each clutching a toy. The photograph led to a conversation with his mom, which unearthed a story about his first day of kindergarten in Tijuana, Mexico. Before that Photo Quest, he had no memory of attending kindergarten in Mexico. That event was, as he wrote, “something that was just swept under the rug, not really a secret, but just never mentioned and eventually just forgotten.”

Connecting our formalized curriculum with our students’ real-world experiences is fundamental to ensure learning is relevant. Using old photographs to connect students with the past is not only a great strategy for engaging students, it’s also way to excavate the marginalized stories from the past that will otherwise be forgotten.

Search around those old boxes or file cabinets, and dig out some old photographs. What stories simmer beneath the surface of the visual? What stories do they tell? What stories can you tell about the stories they tell? Consider perusing the United States Library of Congress collections of historical photographs, or find out if your own country of origin has its own collection. What do photos say about the country?

We hope you will share your work across the various Digital Writing Month spaces that you inhabit. That could be right here at the Digital Writing Month blog; at your own blog or writing space; on Twitter with the #DigiWriMo hashtag; in the DigiWriMo Google Plus Community; at the DigiWriMo Facebook page; or wherever you find yourself writing digitally.
Unknown at 6:44 PM
Share